Following the earlier post about founder member Robin leaving 115 and the first personal reaction to the news, here’s another.

The period of time Robin was at 115 can be divided into two unequal parts: BD and AD, Before Dexion and After Dexion.

In the BD early days, after first moving into the new building, light flooded into Robin’s double-height space, the glass-topped surfaces of his desks, positioned audaciously in the middle of the room, sparkled in the sunlight and pink-purple tulips were arranged just so. Having worked from home for many years, the move to a new, airy, dedicated workspace, purpose-built for his needs, with several like-minded colleagues in units nearby, promoted a palpable sense of promise and optimism. The books he shepherded into the world sat in boxes in a warehouse in Hackney Wick (then Enfield and later Lincolnshire) awaiting despatch to bookshops. Unencumbered by them, Robin was free to roam the wide open plains of his space, whether downstairs at his desk, hovering by the photocopier, fastening a new poster with small magnets to his sliding metal pin board, or upstairs on the mezzanine level accessed by an internal open stairway. There, a narrow gantry allowed books to be removed from one of the bespoke shelves arranged floor-to-ceiling that made up his extensive library. Having extracted one, he might perch on his recliner, pause briefly over his reading and survey the scene below. 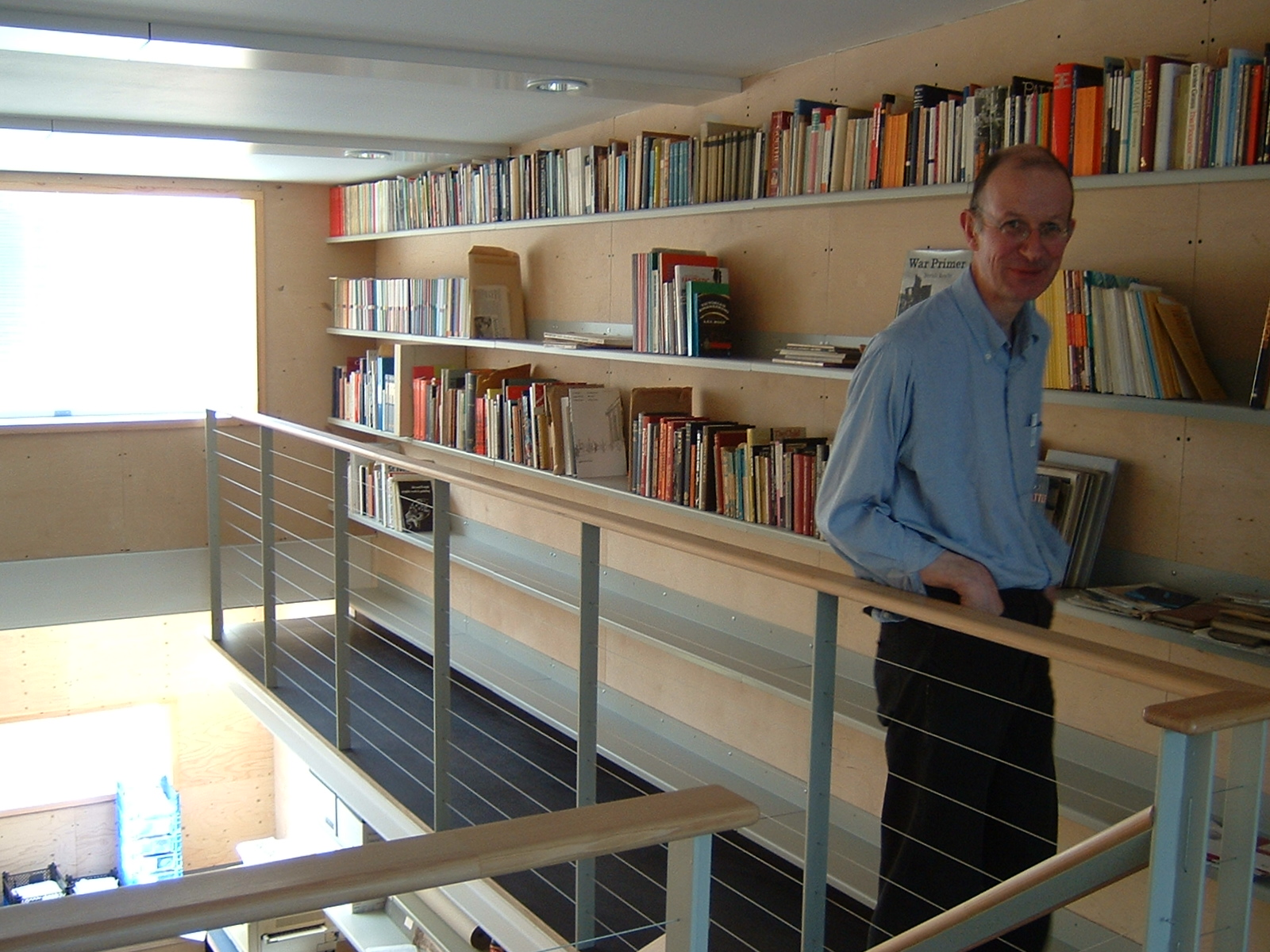 Moving into his unit, 2002, Robin assembles his library

But reality bites. Distribution arrangements not working out as well as they might, combined with a decision to also sell books and CDs through the Hyphen Press website, meant that some of Hyphen’s ever-expanding stock, previously out of sight, had to move in-house. This requiried the addition of utilitarian stacks of Dexion shelving. The AD days were here. The central positioning of his work desks changed. Instead, Robin created a more discrete, somewhat cloistered environment more akin to St Jerome in his study. As well as being editor, publisher and writer, Robin added distributor, packer and despatcher to his roles. Now responding to orders made online, he would get these ready to be collected by courier and logistics company or head out to the Post Office to hand packages over the counter. Within his unit, the mezzanine level was given up, first to a writer, Vanora; then (and now) to an artist and filmmaker, Lisa. Units 2 and 5 became, like others in the building, a volume of shared space.

Visiting Robin in his unit was an uncertain endeavour. If the door was locked the message was clear: he wasn’t in. But if the door was open, even a peer through the window that showed darkness beyond could be sending mixed messages. He may have gone to the Post Office but not locked up. Or the Dexion shelving might be masking the spill of light from the Anglepoise onto his desk. On entering, I’d first call his name, quietly and almost as a question, “Robin?” unsure of his presence. Then, perhaps hearing some low sound or movement, I’d advance slowly, taking care to avoid the piles of boxes, until a small clearing opened up and he hovered into view. There I’d stand, asking something I knew he was likely to be able to help with – maybe about bookbinding, suggestions on paper, or advice about a printer – but while listening, the sight of a work surface taken up with small piles of interesting looking books, unfamiliar journals, or correspondence in odd-shaped envelopes with foreign stamps and neat handwriting would prove intriguingly distracting. Despite myself, I couldn’t help but lower the tone with small talk or gossip, but it was clear this could only be momentary. I’d come and go, and Robin would resume whatever it was I’d distracted him from.

Now, sadly, Robin has left the building, and with him the Dexion has gone too. Unit 2 is cleared and announces itself: watch this space. Meanwhile, fortunately for us, Robin remains in the neighbourhood, ensconced in his new place. And the word is, he’s stepped up from Dexion to the 606 Universal Shelving System.