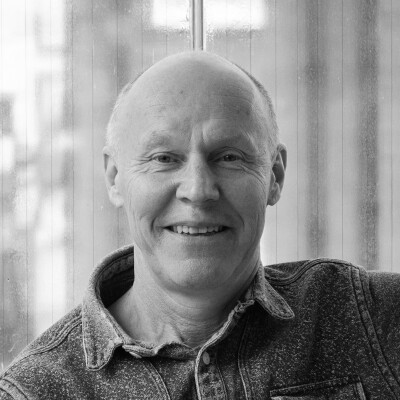 Dan was born in London in 1956 but raised in rural Essex until the age of 16. Apart from a brief spell on the north Yorkshire moors, he has lived and worked in London. After leaving school he worked as a labourer, helping build the now demolished Guardian newspaper building. Over the following years he worked as a steel fabricator, a carpenter, a set-builder and furniture-maker. Then followed a long spell as building manager for Oval House in south London where he commissioned design and construction of new studios, workspace and a café. This led to a realisation that he wanted to design buildings.

Between working, he studied at North East London Polytechnic’s ground-breaking School of Independent Study – investigating the art and politics of engineering – and later, a part-time degree in architecture at North London Polytechnic.

The subsequent core of his working life has been with Duncan Kramer:

For 25 years Duncan Kramer and I have worked together, a wonderful stroke of good fortune. Our design work is firmly grounded in listening, understanding and making.

Their joint work has revolved around: the design practice Material; products for the Front Yard Company and making biodiverse portable shelter buildings with Green Roof Shelters.

The co-operative at 115 Bartholomew Road has also been a central part of their working life, being the third shared workspace they have been involved in.

Uncomfortable with the connotations suggested by ‘architect’ or ‘product designer’, Dan has been searching for an adequate and succinct way to describe what he does. Suggestions are welcome.