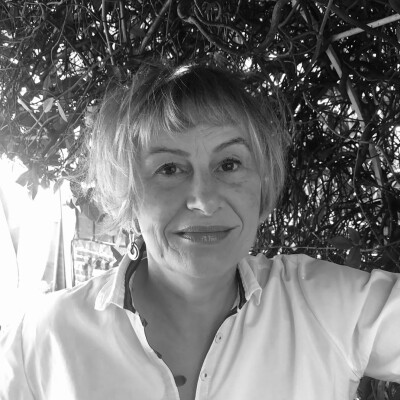 Sarah Monk is currently producing Materially Speaking, a podcast where artists and artisans tell their stories through the materials they choose. Go to materiallyspeaking.com or your favourite podcast player.

The first series uncovers stories from a unique community of artists and artisans who work in Pietrasanta, northern Italy. They follow in the footsteps of Michelangelo who first arrived over 500 years ago to choose marble for his Pietà from the local quarries. In addition to their own stories, the series reveals a bigger one, of how one community dominated by a single natural resource adapts to constant change.

The seeds of this project go back to her childhood, where she carved wood in her father’s workshops while he crafted Renaissance musical instruments.

For four years she was director of CultureFiles in Philadelphia, USA, producing an online guide to the arts and culture of the city. For two years she also wrote and presented a live weekly arts segment on NBC TV, What to do at the weekend.

Aged 24, her passion for music led her to found Prelude Entertainment producing concerts and providing musicians for corporate hospitality. Prelude became a preferred vendor for venues including the British Museum, Royal Academy of Arts, Natural History Museum, Science Museum and Tate. Prelude was sold as a going concern after 20 years.

Other career stops include the marketing department of EMI records; working in the household of Elton and Renate John; being PA to Frank Skinner; researching how film, theatre and TV directors train (for the Directors Guild of GB); event manager for the Japan Festival and a short, but eventful, stint in industrial relations.