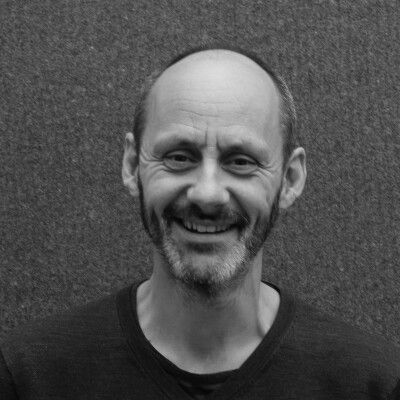 Robert started his professional career as a cartographer and made slide-shows and cine-films in his spare time. In 1991 he returned to college to develop these passions and took an MA in Electronic Arts & Graphics at Coventry University. There he created his first computer animation, The Sleeper.

In 1993 he was awarded an Animate! grant by the Arts Council of England to make End of Restriction, a five-minute film created on an early home computer that enters the claustrophobic world of a teenage boy living in an English village.

In 2001 he completed Home Road Movies for Channel 4 and the Arts Council of England with National Lottery funding. The film tells the true story of his father, their family car and holidays abroad. It went on to be nominated for a Bafta and won some of the most prestigious awards in animation including the Cartoon d’Or in 2004.

Robert’s next film, Dead Air, dealt with the unstoppable nature of change in our communities and premiered at the 2014 London Film Festival.

He has collaborated with many filmmakers including Yousaf Ali Khan on his Bafta nominated live-action short, Talking with Angels. His latest feature film, The Journey set in Afghanistan is currently at the script development stage.

Between making personal films, Robert runs his own company, Bradbrook Films that provides animation for film, television and new media. Recently the company produced animated scenes, title sequences and visual effects for the feature-length documentary, Tony Benn: Will and Testament.

As well as being head of animation at the National Film & Television School, Robert gives talks and storytelling workshops to colleges, festivals and production companies around the world, including for Aardman Animations.