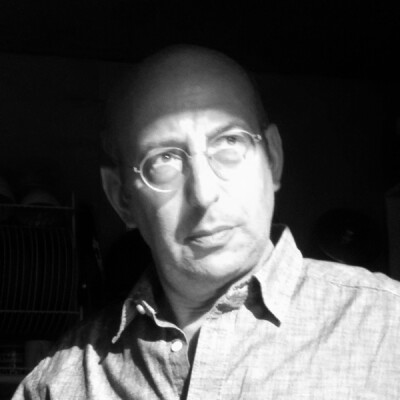 Peter is an independent graphic designer working with clients alone or with occasional collaborators under the name Matter. He works predominantly – though by no means exclusively – producing printed matter for a variety of organisations and individuals.

Early on, Peter got a sense of the principles of print-based design by working in a small screen-printing workshop producing posters for fly-posting. Later, but before the Apple computer, he became a ‘paste-up artist’ having learned how to paste-up ‘artwork’ standing at a parallel motion drawing board: using a Swann-Morton scalpel (with 10a blades) cutting up rubylith film, or galleys of IBM golfball-derived text, or paragraph, line, word and letter corrections; sticking different elements onto a baseboard with Cow gum or hot wax; rubbing down Letraset for headings; adding rules or touching up with a Rotring pen and masking errors with Tipp-Ex or white-out fluid.

Later still, he worked at the London Borough of Hackney as its lead designer and then Windhorse Associates, a graphic design co-operative. He was instrumental in setting up the design discussion group 032 which held frequent meetings between 1986 and 1988. In 2000 he exhibited specially commissioned work for the touring exhibition Look Out: art/society/politics.

Within 115 he has collaborated with fellow designer Katherine Gillieson, the artists Cleo Broda and Aileen Harvey (all now ex-115); Simon Jones and Jack Neville (furniture, exhibitions, architecture); the publisher Robin Kinross and the designer/maker partnership of Dan Monck and Duncan Kramer. In 2012 he worked again with Robin Kinross and designer/editor Daniel Poyner on a book now published by Hyphen Press [available from bookshops or direct from Hyphen Press]. More recently he collaborated with fellow 115 member Sarah Monk and 115 alumnus Ben Edmonds on the website design for the podcast Materially Speaking.

Matter works with arts bodies, publishers, educational institutions, local authorities, trade unions and charities as well as photographers, artists, architects, writers and furniture-makers. Rather than imposing an unsuitable ‘style’ or æsthetic, Matter suggests what seems right. Avoiding the faddish or fashionable, Matter attempts to produce design solutions appropriate to need and context. A Matter touchstone is faith in the organising power of typography to explain. Another is a belief that means are as important as ends. Experience suggests this happens most rewardingly through partnership between designer and client. And Matter always keeps the intended audience uppermost in mind. This can best be achieved by attentiveness and meticulous focus on all the details, both large and small of every project. From the choice of typeface and the space between letters, to the material the thing is printed on; from thorough proofing and re-proofing and careful email exchanges, to a call to check that the completed job arrived on time.